A once prominent physician fraudulently charges the same trip to Japan to three different employers, including two universities and a private firm. Over an eight-year period, he amasses more than half a million dollars from falsified expenses.

A Connecticut woman pleads guilty to embezzling more than $1 million by exploiting financial control weaknesses in her company’s travel and expense (T&E) and payment processes during a three-year period.

Fortunately, high-profile cases like these are highly unusual in their duration and amount. The average expense fraud case lasts 24 months and results in losses of $31,000, according to the Association of Certified Fraud Examiners (ACFE).

In a recent interview with The Company Dime, I shared my perspective on how companies can protect against falling victim to T&E and P-Card fraud cases like these.

Faking credit card billing statements is pretty bold. How common is this type of fraud?

Every organization is guaranteed to have some fraud. The more employees you have and the less monitoring you have – the more chances there are for the fraud to stay under the radar. We find fraud that rises to the level of a million-dollar embezzlement scheme like this is extremely rare – a fraction of one-percent. However, even a few fraudsters can leak millions of dollars.

Expense fraud is often the gateway to even larger workplace fraud schemes. For example, someone who cheats on an expense report is more likely to commit other kinds of workplace fraud, such as using a corporate card to fund a side business or support a lavish lifestyle. In 75.6% of expense reimbursement schemes, the perpetrator was also engaged in at least one other form of occupational fraud, according to the ACFE.

How can companies detect and stop fraud cases like these?

Companies aren’t defenseless against this type of fraud. An automated expense auditing and compliance monitoring solution like Oversight Insights On Demand eliminates the ability of an employee to conceal fraud by manually altering credit card statements. That’s because the artificial intelligence (AI) system is continually accepting, monitoring, and analyzing credit card transactions through direct card data feeds. These transactions would have been flagged as high risk based on multiple risk dimensions.

For example, in the Connecticut case, the system would have identified transactions that appear to be personal even though they were expensed. Comparing these transactions to all other employees, the system would have flagged the spending behavior as abnormal. Then, looking at the level 3 card data, we would have visibility to purchase item and other details, such as merchant category codes, keywords, and addresses, to identify high-risk merchants or transactions. Finally, large transfers from credit cards to PayPal and Venmo accounts also would be a major red flag.

Typically, this type of fraud would have been detected by a sophisticated AI system like Oversight in less than 30 days, rather than going on for years.

Proactive data monitoring and analysis were found to be the most effective control for combating fraud overall, resulting in 58% faster detection and 52% lower monetary losses, according to the 2018 ACFE fraud report.

Oversight leverages AI and machine learning technologies to analyze all T&E and card transactions and detect high-risk transactions such as fraud, waste, and misuse. The solution also provides sophisticated analytics to identify patterns of internal and external collusion, bribery, and corruption.

Don’t fall victim to T&E and P-Card fraud. Check out our best practices guide and discover how to detect and stop T&E and P-Card waste, misuse, and fraud. Better yet, request an Oversight demo today and see how you can turn your manual expense audit process into a streamlined and automated risk mitigation workflow. 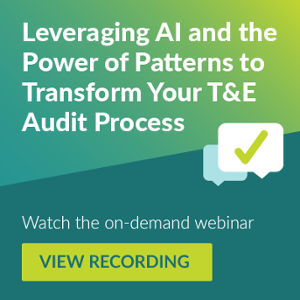