Mike Kenealy, COO of Insiders Integrity, is involved in a project on the Philippines designed to take on ethics at the local level.  The project has five key agenda items:

This project is laudable for addressing the challenges of a high risk/low integrity business and government climate.  The more I thought about it, the more I began to realize these key agenda items reflect two Oversight mantras – inspect what you expect and act upon what you learn.

The late Rick Page was an expert in complex selling, founder of The Complex Sale, and the author of “Hope is Not a Strategy”, a bestselling book on the art of managing business-to-business selling.  Rick’s philosophy is that in order to have a great strategy, you first have to have a plan, measure the progress toward meeting the plan, and make adjustments based on your measured progress. Strategy is all in good execution.

Combatting anti-bribery and corruption is another category where “hope is not a strategy”.  Having a plan by itself and hoping that it will work is not enough; you have to be able to measure results and you can’t measure results without knowing what is happening.

And you can’t take action without measuring the impact of the actions.

At Oversight, we refer to this as “inspecting what you expect”.  We have talked before about the Hawthorne effect, also known as the “observer effect”, in which individuals modify or improve an aspect of their behavior in response to the awareness of being observed.  The original “Hawthorne effect” study suggested that the novelty of being research subjects and the increased attention from such could lead to temporary increases in workers’ productivity.  Oversight customers have observed this same impact from monitoring the compliance of T&E and purchase card transactions.  Once employees know their actions are being observed, most previously non-compliant employees modify their behaviors to conform to policy.

It is also important to act upon what is learned in inspection.  Without communications and consequences, behavior is unlikely to change. Our customers make their employees aware of non-compliant transactions and behavior and send policy reminders when behaviors are observed that are out of compliance with policy. Benchmarking data also allows leadership to make decisions based on what they learn from our insights.

Kenealy’s project similarly does not rely on hope as the strategy for its success.  It leverages awareness, data, and social media to “inspect what is expected.”  It takes advantage of recoveries and publicity as calls to action.  Kenealy’s project is a good start for making a dent in bribery and corruption in the Philippines, but you can utilize Oversight Insights On Demand™ to make a dent in potential instances of bribery and corruption in your own organization starting today! 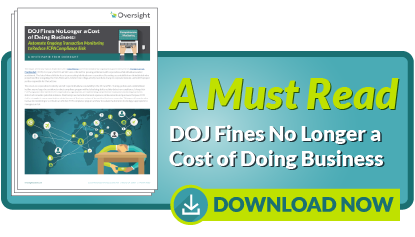