Survey: Men almost twice as likely as women to cheat on expenses

Men, white-collar managers and staff, and younger employees are far more likely to commit expense fraud, according to new survey of 1,200 business travelers in the U.S., the U.K., and Australia by Chrome River Technologies.

Chrome River’s survey found expense fraud was more likely to be committed by:

For example, one executive was making well over a six-figure salary, but it still wasn’t enough. Over a few years, the executive wrote off several million dollars’ worth of fraudulent expenses, including a sight-seeing trip to the south of France with his wife.

“It’s unusual for high-ranking executives to commit fraud, but when they do, it can be spectacular,” noted Anne Becknell, a senior vice president of strategic solutions at Chrome River, who recounted the story in Forbes. “Large or small, expense reimbursement fraud really cuts into a company’s bottom line and drives up the cost of doing business.”

Other survey takeaways include:

Overall, business travel expense fraud costs businesses an estimated $1.9 billion per year. Businesses need to understand the scope of the problem and take active measures to combat it. To that end, one survey finding caught our eye:

Frankly, this finding didn’t surprise us. We’ve seen firsthand how the lack of strong internal controls set the stage for fraud. Likewise, expense reporting systems provide a first line of defense by catching when employees try to submit an expense a second time.

The problem is many businesses don’t take the automation far enough. Sure, they’ve automated the reporting process.

Unfortunately, many haven’t yet automated the expense auditing process. Many businesses still manually audit a sample of expense reports each month. For all their effort, they typically find mostly low-level infractions but uncover little material fraud or waste. 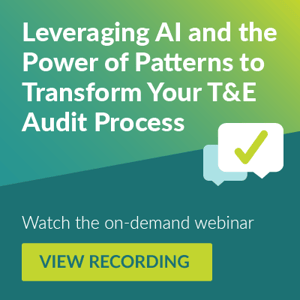 There’s a better way to combat fraud: A recent report by the Association of Certified Fraud Examiners (ACFE) identified proactive data monitoring and analytics among the most effective internal controls at combating fraud in travel and expense (T&E) spending. By implementing proactive data monitoring controls (such as Oversight Insights On Demand), businesses reported 58% faster fraud detection and 56% lower fraud losses.

We explore how continuous monitoring and automated risk mitigation can help your business detect and stop fraud in our on-demand webinar.